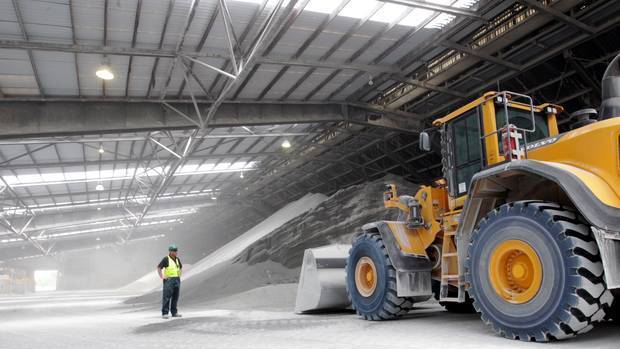 Made with funding from NZ on Air.

Darryl Oliver has been dairy farming in the Galatea Valley below the lush bush of the Urewera Ranges for the last 16 years.

“We’ve got pure water just pouring out of these hills and we want it to continue down to the sea in it’s best state we can,” he says.

“We have to try and farm so we’re not putting phosphate, and sediment and ‘N’ into our waterways.”

That’s why Oliver has switched to using biological fertilisers.

Biological fertilisers contain no nitrogen – or N – which has been blamed for damaging the environment when carried through the waterways.

Oliver says the alternative fertiliser was just as effective.

“Over time, I’ve seen how well it works. I was sceptical at first, I was traditional soluble fert and n man.

“Using this fert, we now have a bigger depth of topsoil. And we don’t have any metabolic issues now. It starts at the grass and goes through to the whole process we have.”

On the other side of the fence, and not so convinced, is soil scientist Dr Doug Edmeades.

“When people say ‘use my product, it will reduce the environmental footprint’ be very, very sceptical of that suggestion. There’s no evidence to support those statements.”

Both use air and carbon to feed the grass and soil but conventional fertilisers also use nitrogen.

Functional fertiliser uses a mix of fungi, bacteria, bio carbons and carbohydrates to eliminate the need for nitrogen.

Functional Fertiliser director Peter Burton said the active ingredients were in a mix of fungi and bacteria, added to dolomite and Sechura rock.

“It’s just loaded with beneficial bacteria and fungi which speed the digestion matter of organic matter in the soil.

“It’s lovely stuff, it’s got a real earthy, bush-type smell to it.”

“When we were farming I couldn’t get answers to a lot of questions I had, like ‘why do I have to put on superphosphate?’

“It was same with animal health we were doing all these things we were told to, ‘its just the way it is,’ they said.

“I started to think I there must be a linkage between what we doing with soil fertility and animal health.”

And that’s when he came across mineral resources.

He claims his “functional” fertiliser treats the biology of the soil, as opposed to traditional forms of fertiliser which treat the plant directly.

“We applied lime which we were advised not to do. And we started to see some interesting results.”

“We’re trying to sequester carbon into our soil and, by doing it in the biological method, we not killing soil biology so we are allowing soil biology to grow,” Oliver said.

“By putting on fungi and carbohydrates, we are feeding it so the whole engine room is working.

“We are getting grass to grow through the natural process as much as we can.”

He has 40 years of soil and fertiliser expertise, and is a fertiliser consultant with his own company, Ag Knowledge. He says there’s no evidence different forms of nutrients have any less impact on the environment.

“Whether a soluble fertiliser, industrial fertiliser, chemical fert, organic fertiliser – the form is irrelevant in terms of those mechanisms,” he said.

“They will not solve the environmental problem as a result of having healthy soils irrespective of whether of the nutrients have come from organic sources or chemical sources,” Edmeades said.

Edmeades says fertilisers have been used for centuries and were a vital tool for farmers.

“Without those inputs, we wouldn’t have the production we’ve got.

“If we stopped fertilising, production would decline and within 10 years we would be in deep strife in terms of the productivity of our land.

“Fertiliser is absolutely essential to, dare I say it, the sustainability of the whole agricultural system. Without fert, the production would decline about 5 per cent per year until we had virtually very little production at all.”

“There’s no evidence that our soils are being degraded, what people say of the chemical nightmare, that is simply not happening.”

“There is no evidence from that survey, under our intensive agricultural systems, that our soils are being degraded except for situations where farms have been overcropping.”

Is your grass half full?

Burton and his wife Coralie and the Functional Fertiliser team regularly test their biological fertiliser by taking samples of grass grown in cages on different farms around the country.

Once dried, the amount of nutrients in each sample can be weighed.

Burton said it wasn’t wrong to use conventional forms of fertiliser but failing to embrace modern advances in farming and more sustainable practices is.

“There are better things to use than the mainstream products particularly urea, but it’s the reliance on excess amounts that is the major issue. We can be much more efficient with what we’re doing and have less leakage into the system.

“We don’t have to make huge shifts in what we’re doing, we just have to prioritise, so soil fertility systems as far as we’re concerned come first then appropriate stocking rates then a lot of things simply disappear as issues,” Burton said.

A word in urea

Edmeades said urea was the most common type of fertiliser today and about 40 per cent of the world’s population relied on it to grow crops.

“So if we come out with a statement saying we have to get rid of chemical fertilisers, then you have to decide what we’re going to do with the 40 per cent of the population that are gonna starve to death, that’s how important is.

“I would be concerned if there was evidence that superphosphate killed earthworms or did this or had detrimental environmental effects but the fact is science shows that that’s quite the opposite is true.

“When you correct the nutrient deficiency, say with phosphorus using superphosphate, you grow more. In our pasture system that means more litter going back into the system and that feeds the bugs.

“So these people running around saying we in deep strife with soil quality going back, we’re using industrial chemicals, I say there’s no basis for that at all.”

Proof of the pudding, in the pat

Over on the coast of Whakatane, Neil Burke is also claiming changes in his soil since taking up biological fertiliser.

“When we first came here a cow dung would just go like concrete. It would just dry out and not be breaking down like this so now have this micro-life that’s coming into the dung,” Burke said.

“As a result of good quality feed coming through, the animal gut is working better so what is being deposited out the back end is more readily accepted into the soil.

“We have increased in speed of the whole nutrient system.”

But Dr Edmeades said what works is science-based agriculture and there are other ways farmers can minimise their environmental impact.

“Many of these products are sold into the market on basis that what we are doing with traditional agriculture including chemical fertilisers is bad, and I challenge.

“Yes there are problems confronting us at the moment in terms of water quality and I’m confident we can solve these problems.

“People on the fringe will say get rid of that and start with something else. I’m saying we can have our cake and eat it too, providing we apply objective and scientific analysis to the problem.

“I’m sure we can solve the problem and have healthy soils and a healthy environment too.”

For Darryl Oliver, he believes it’s been a change for good, benefiting not only his farm and animals, but the wider environment.

“It takes time. You have to be committed to the process it doesn’t happen overnight but the change is quick. Before you know it, you’re not having the issues you used to have, its great philosophy. It works.”

Edmeades meanwhile, maintains his view any assumption there are some bad fertilisers is wrong.

“This is the whole myth that a fert been made through a manufacturing process, it is de facto bad, there’s no evidence for that all.

“Fertilisers that are correcting nutrient deficiencies are essential and good for soils, enrich soils and get biological activity going and increase productivity.

“The whole basis for the alternative fertiliser industry is based on a false belief that somehow we are destroying the world – we’re not.

“The industry is completely deregulated,” Edmeades says. “There’s no legal definition of what fertiliser is and people can go into the market with anything and call it fertiliser and the farmer is none the wiser.

“It’s a technical area, and it’s easy to dupe farmers into buying something that isn’t up to it or the claims about the product aren’t supported by evidence.”